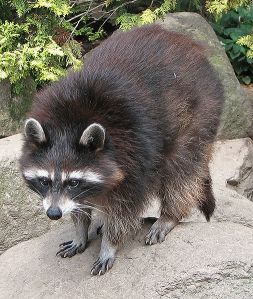 A few years back Mrs. Omni and I were celebrating Father’s day when I learned a very important lesson. See we have a very large tree in our backyard and every year a family of raccoons take up free residence during the summer months (I’m a softie, what can I say?). In an act of inebriated altruism, I had delivered the last of my dinner to the base of the tree and watched as the largest of the Raccoons (undoubtedly the male) climbed down the tree to retrieve the food while his mate and their two little ones kept a watchful eye on me.

Now, as much as this may sound ridiculous, I found the raccoon’s behavior toward my wife and I very intriguing (could’ve been due to being on the sauce…whatever). Since that Raccoon couldn’t ascertain whether I was a friend or a foe, he acted in his own self-interests and proceeded with caution, assuming the worst-case scenario as far as I was concerned. He slowly climbed down the tree and then grabbed the food, rarely taking his eyes off me.

See, the one thing that so many of us seem to forget is that survival of the fittest is simply focusing on your own best self interests and NOT assuming that everyone you encounter shares those same interests with you. What that Raccoon knew was that if he didn’t watch his @$$, no one else would and perhaps many of us would do well to remember that in our own lives. Yes we live in advanced times were we believe we’re relatively safe from dire threats but this safety net may have given us a false sense of security. Basic safety and survival are thoughts most of the populace doesn’t even consider in this day and age  thanks to Maslow, most are focused on being ‘happy’.

However, predators still exist, just because they don’t lumber onto our territory on four large legs or have razor sharp teeth doesn’t mean that we shouldn’t ‘keep an eye on our fry’ as Mrs. Omni states.

I remember when I had a chat with my former Operation Manager in regards to why banks would offer loans far too large to people who really couldn’t afford them. His answer was simple; it wasn’t the banks job to make sure you could afford the loans, that was YOUR responsibility. Their responsibility; their self-interest, is to crunch the numbers and verify the maximum they can loan you. They don’t really know that $400,000 may be too much of a mortgage for you to swing, but if you think, “they wouldn’t give me more than I can handle” then you could be gambling with your financial future.

Bluntly, it’s in their best self interests to give you as much money (debt) as they possibly can, it should be yours to only accept what you know you can handle comfortably.

Isn’t that the main thrust behind Keoni Galt’s beliefs in the motivations behind some large-scale businesses? Is it really that difficult to think that the self-interests of some companies are diametrically opposed to that of John Q Public? Were Ford’s best interests in sync to our own when they produced the Pinto? Think about yet one more example; is McDonalds interested in serving nutritious meals, or simply filling your belly with something, which will eliminate hunger quickly and efficiently?

Do you see what I’m getting at, and please trust me; I’m doing what I can myself to learn where I can make some changes. If you don’t watch your @$$, who pray tell is going too?

What I’m saying is to take responsibility for your life, like that Raccoon who didn’t take it for granted that I was simply a friend, maybe we all should second guess when we think that businesses, government, or ‘the powers that be’ are really working in our best interests. I’m not saying live a cynical life always being afraid and looking over your shoulder, what I’m saying is to take everything with a grain of salt, even this very post, comprende? I’m also not saying to avoid McDonalds, or car loans and mortgages; I’m simply saying it would be foolish to think they are working in your best interests 100% of the time.

Their goal is to make money off you, remember that.

The world doesn’t care what we believe or wish, the world would only provide appropriate reactions to previous actions, simple as!! We can argue with our consequences, or we can work to increase the odds of achieving what it is we wish in life. It doesn’t matter how much we wish to do so, running east looking for a sunset will only result in failure.

This at the end of the day is why I shake my head so much at what CL appropriately calls false teaching being fed to people in the mass media. I agree with her 100%, it is evil and can lead to excruciating circumstances. Men being told that masculinity is something to be stifled and that women can act just like men can and usually does lead to unwanted circumstances. Once more, we have to keep in mind the self-interests of others when dealing with both genders, or see the folly of our own mistakes. It makes no difference to argue with what the other gender desires, it can’t be changed no matter how much we wish them too.

People, businesses, and ‘the powers that be’ are going to follow their own self-interests, and we can either get on board or realize this, or we can ignore them and later wish we did.

Happily Married black man with ADHD in Canada trying to navigate this world despite being knee deep in Misandry
View all posts by Omnipitron →
This entry was posted in General. Bookmark the permalink.

1 Response to Self Interest