The Canary In the Coal Mine; 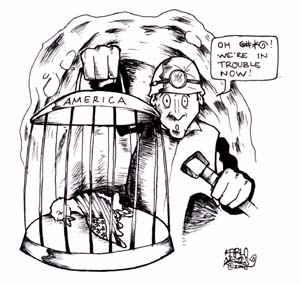 Not sure how many have heard that term before, many may not know where it originated from. See, Canaries where used as an early warning in the early low-tech days of Coal Mining. Since Canaries sing quite a bit of the time and are more sensitive to toxic gases, when the Canary stopped singing, it was time for the miners to high tail it outta there before the deadly and invisible fumes killed them too. A passage from Wikipedia also has another ominous meaning to it as follows;
“Hence, the phrase “canary in a coal mine” is frequently used to refer to a person or thing which serves as an early warning of a coming crisis.”

It has been said many times on the manosphere that the Black community is this self same canary for other races as we spelunk this coalmine called Feminism. However, our female counterparts seem oblivious to the toxic gases which fill their lungs as they bray on and on about fishes, bicycles, and empowerment.

Adonis linked me these two videos by Rick Scorpio which highlight the current issues between contemporary Black men and women and the negative consequences women now face due to their prior choices. No lie, these two videos literally gave me chills as I watched them because everything save the Katrina experience I’ve personally witnessed in my own life. For the record, I don’t live in an American ghetto, I grew up in a relatively safe Canadian Suburb 45 minutes West of Toronto yet I still bore witness to the plague which has befallen Western Society regardless.

Listen gang, it’s one thing to read about the stats and reports about the situation, it’s another to see it first hand. This is just me, but the reality on the ground has always had more of an effect than statistics alone. When the stats bolster the ROG, then it hits like a freight train. My younger bro and I where the ‘nice Blacks’ in high school and neither of us could catch a black girl to save our lives. We were invisible, obviously not ‘thug’ enough so not worth any attention. My older sister was actually accosted once and accused of being ‘white washed’, which was a more up to date version of being an ‘Uncle Tom’. My sister asked why.

I wish I was making this up.
She was accused of being a ‘sellout’ because…she regularly went to class.
Sigh.

My older sis was another story altogether. She hooked up with some Black girls in the senior grades who where exactly like the typical Black girls Rick Scorpio talked about. Uppity, entitled, and constantly harping about how bad Black men where and how they needed to ‘man up and treat them better’. My sis wasn’t like them, but their attitudes (and resulting relationship status) weren’t lost on her either.

Those two girls where single throughout most of high school, no surprise there.

Scorpio is also bang on with the former cock carousel riders and the latent desire for ‘nice guys’ well after the fact, been there and done that personally. Had a comment thrown at me from a group of upset Black women years ago when I was dating Ex#1 for obvious reasons. I just shook my head at the irony. Ex#1 had heard it, I hadn’t but at the time I wondered what the deal was? Black girls didn’t and wouldn’t give my bro or I the time of day just a few years prior, yet got upset that I started dating the women who actually paid me attention.

The situation would be funny if people weren’t actually suffering.

As for finding God well after it’s ‘too late’, yeah, seen that too. I have many relatives who are single and immerse themselves in the church now and their lives mirror exactly what Scorpio has stated. I’ve one Aunt who had three illegitimate children way back in the 60’s (yeah I know, holy @#$%). I’ve been told that even at such an early time that there was still a guy who wanted her despite her situation and pursued her regardless.

Yet, (sadly) she was unmoved, she found another ‘thug’ and had child number four…and this White Knight had enough and finally bounced.

She’s been single ever since…and is the most devout Christian I’ve ever met. It get’s worse, the fruit doesn’t fall far from the tree and unfortunately two of her daughters met not so great dudes who later split. They too are single, one on her way to becoming a bishop. You know, I’m not saying this to bag on my family, I’m telling you this because of one thing and one thing alone, the world doesn’t care who we are, it doesn’t care what our desires are or what we’ve done. The world just does what it always does and we can either accept it and try to make things better, or we can ignore it and take our chances. I’m very upset that many in my family had such a hard go, but their choices undoubtedly influenced their outcome.

Early thug chasing leads to late ‘good’ men yearning, I’ve seen it so often it no longer even shocks me anymore. The negative effect of rejecting men as fathers simply compounds the problem and now we have a situation where thugs are produced en masse while good men become more and more rare. So what do Black women have to show for it after all these years of making Enemies out of true future partners? While Black men are arrested and jailed in increasing numbers, Black women wail and scream about the lack of good men available to them. Rick Scorpio is right on the money when he states that after years of being told us Black men aren’t necessary, we finally bounced to ‘greener pastures’.

Well Black ladies, you got what you wanted, are you now stating it wasn’t what you desired after all? Heck, Black men lamenting the state of relations between them and Black women is hardly a new thing, Obsidian has been on about this for years, as have others. Those if you want black men to change, give them reason too. To expect them to ignore the thug life and embrace responsibility while Black women remain critical and abrasive is expecting something for nothing.

Nothing in this life is free, nothing.

It was that exact attitude which drove Black men away from you ladies in the first place; more of it won’t bring them back. To the Black ladies, learn from the mistakes of your older sisters and mothers. Black men are the sellers of commitment to Black women and denigrating them isn’t getting you anywhere. You have some responsibility in this mess, own it and learn from it.

To White western women, take a good, long look. What you’re seeing is actually the Canary in the Mineshaft of your very own situation in the future. Blacks are merely a few decades ahead of you in terms of future regression. Sure, some of you are full of hubris thinking that you’re immune and that it won’t happen to you or that men are just trying to scare you. Just one thing to say about that…

Black women thought the same exact thing…where are THEY now?

16 Responses to The Canary In the Coal Mine;