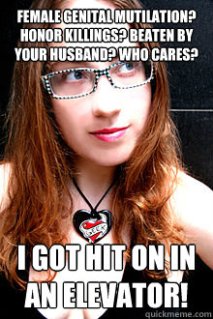 By now you have heard the wonderful tale of Rebecca Watson and her creepy elevator interlude at a Dublin Atheists conference. Basic rundown, Rebecca was partying until the wee hours, get’s on an elevator and a dude makes a pass at her. If you haven’t heard, both W.F. Price and Ferdinand Bardamu have excellent pieces written about it so please take the time to read them both. However, it was a comment by Dragnet, which really got me going and inspired this blog post.
“What happened here isn’t complicated, folks. A nerd saw a drunk chick coming home at 4 am and decided to see if she was slutty. Unfortunately, because he didn’t know shit about Game, he fouled it up and set off her beta/creeper vibe. Just another evening in the life of an AFC, if you ask me. If she had been attracted to this guy this wouldn’t have even been story. She’d have gladly gone upstairs to get powerfucked by the conference alpha.
What this situation also reveals is Watson’s own unfamiliarity with male sexual attention…because she simply is not very attractive. Hot women tend not to make a big fuss about guys hitting on them. They’ve been getting male attention ever since high school and usually can distinguish the normal guys from the tiny minority of truly dangerous men. The fact that Watson freaked out is really an indication that she isn’t terribly accustomed to male attention, because she viewed this guy’s advances as a de facto threat. So much of feminism is really about ugly chicks being pissed off at not having sexual power, or completely misreading the few scraps of male attention they do get because they’ve been marinating in the illusory oppressor/victim paradigm for so long.”
Spot on Dragnet and well put. This had me thinking about male and female dynamics of course and I had to wonder. Consider this; how simple can it be for a female to judge her SMV in real world situations? One of the best sources of feedback wouldn’t just be the amount of possible suitors, which regularly approach, but also the quality too no? How many women who are considered to have ‘low value’ also have quite a few ‘high value’ men regularly trying get her number? It’s a validation thing; there is no two ways about it and it can’t but stroke the ego of the sought after female in question. 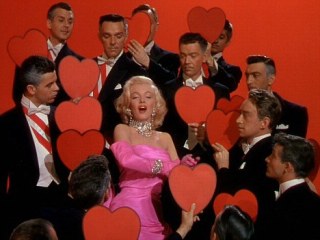 However…what about when the opposite happens? What happens if the high value males ignore you and all you get are what others may consider “the dregs’ if anything at all? Not really hard to be considered a bottom feeder in this entitled day and age of princesses and unreal expectations.
Yes, as anyone on the manosphere already knows, women don’t want men they consider lower than them to even approach them, much less mate with them but I believe that there is one more thing to consider. Possibly with an inflated sense of self worth, this elevator mishap was a real live reality check for Rebecca’s true SMV. Remember guys, a man’s SMV is something we can directly control long term, we can learn game, become more efficient at work and gain more experience and confidence. A woman’s SMV is capped and she has indirect control at best.
Male bums can become multi-millionaires, but even a boatload of plastic surgery may not turn a female 2 into a 10.
As men, we may not be able to fathom what sort of ‘insult’ this meant to her or to many other women in the world when these situations occur, however it doesn’t make her ridiculous actions right. Here’s hoping that whatever anonymous dude who may have set Rebecca off, (provided he’s actually real and not a ploy simply to get attention)  get’s this part of Dragnet’s message;
“The take-home message for that guy is to not be ashamed of being a man. Don’t be ashamed of wanting to fuck and doing something about it. Once you internalize the shame, then man-bashers really have won. I would tell that guy that the shame he feels is entirely external, that it doesn’t belong to him and that he doesn’t have to hold onto it. That us guys have own problems and setbacks and our own hopes and dreams—too much shit to worry about to take on the problems of women as well. I would tell him that he can walk tall and proud, that he can walk upright and that he owes it to himself to do so, especially now that feminists are pissed. He took a shot and he blew it. Happens to everybody, even alphas.”
As Dragnet put, her actions say more about her than they ever do about you.
Omnipitron